APNEP has a long history of working in both North Carolina and Virginia, as water from both states ultimately drains into the system’s sounds.  Water from 38 counties and cities flows from river basins in Virginia into North Carolina's Albemarle Sound. However, while waterways may connect the two states, resources and information that showcase this connection are limited. In conjunction with the 2017 Memorandum of Understanding between North Carolina and Virginia state agencies, APNEP is working to increase awareness on both sides of the state line of the vital historical, cultural, and ecological linkages between the two states. 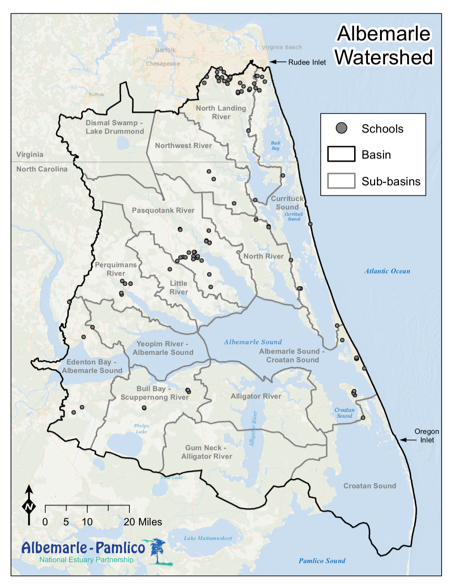 As part of this effort, APNEP worked with Virginia-based partners, including Lynnhaven River NOW and the Virginia Department of Cultural Resources, to organize an workshop for educators in southeast Virginia in July 2019. Teachers working in Virginia Beach's "Southern Watersheds," which stretch south of Virginia Beach towards the NC-VA state line, often don't know that their waterways drain into Albemarle Sound and not the Chesapeake Bay. The workshop increased knowledge of the unique history and natural resources of this region, as well as its connection to the Albemarle-Pamlico estuarine system. APNEP created a map of the entire bi-state Albemarle Watershed, which includes Virginia's Southern Watershed and North Carolina's Pasquotank River Basin, for use at and after the workshop.

The resources shared at the Southern Watersheds Workship, including presentations, lesson plans, articles, and photos, are also available online.