Mapping North Carolina's underwater meadows from 11,000 feet in the air

"If we can't document how things used to be and how they're changing, we're flying blind." This assertion from Dr. Dean Carpenter, APNEP’s Program Scientist, resonates on multiple levels when it comes to discussing North Carolina’s seagrass habitat. Because these underwater grasses need good water quality to thrive, we can better understand if the overall health of the estuary is improving or in decline by examining how high-salinity seagrasses in the Albemarle-Pamlico estuary change over time. 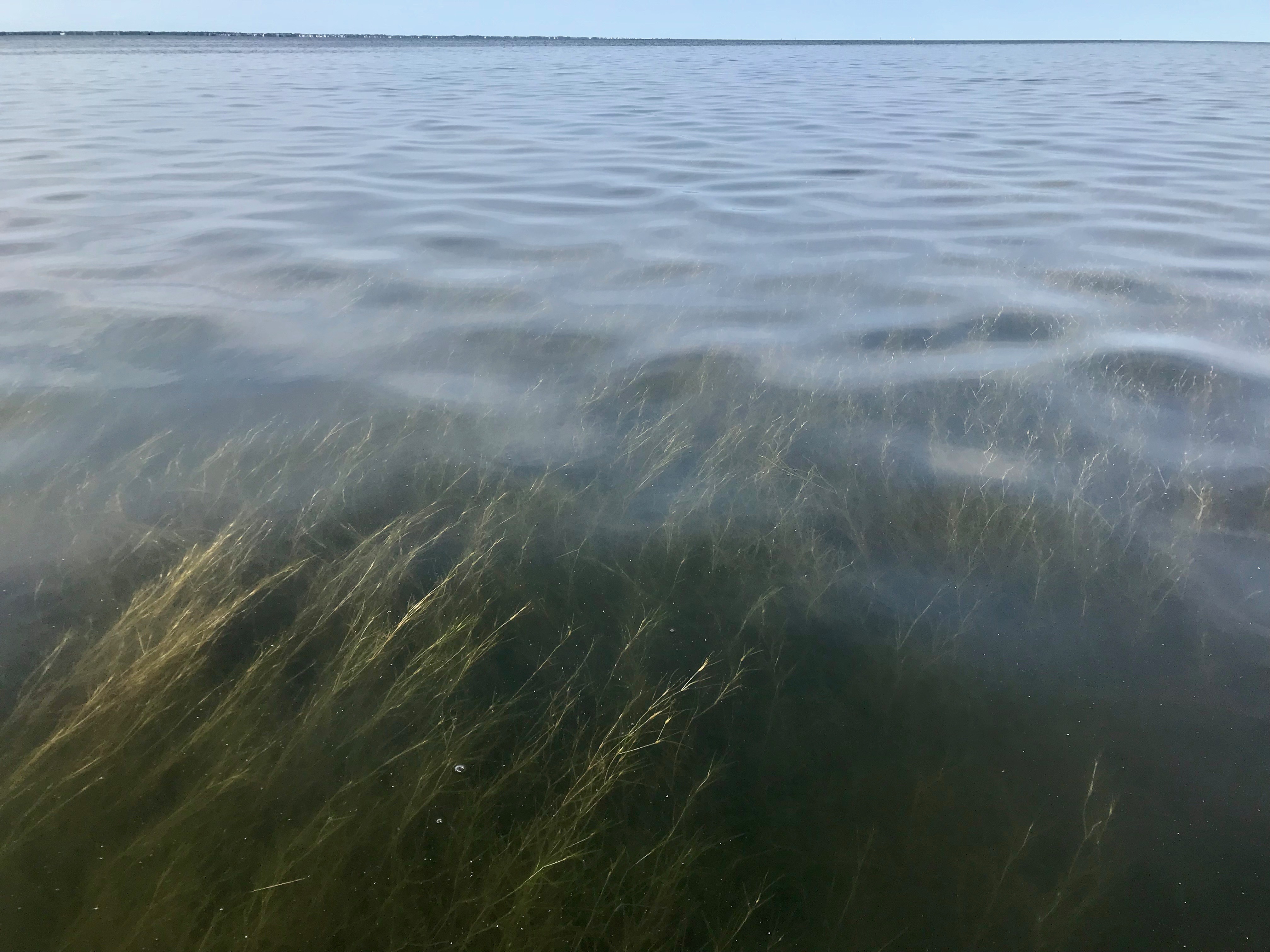 In an effort to monitor seagrass status and trends, for over a decade APNEP has partnered with a Submerged Aquatic Vegetation (SAV) Team to create maps of seagrass within the high salinity areas of our sounds. During 2019 and continuing into this spring, APNEP is coordinating with the N.C. Division of Marine Fisheries, N.C. Department of Transportation (N.C. DOT), and other partners to collect data for a third map of the Albemarle-Pamlico estuary’s underwater grasses. But how can you get an accurate map of high-salinity seagrasses scattered behind over 200 miles of barrier islands? The answer, it turns out, lies not under the water but in the air. 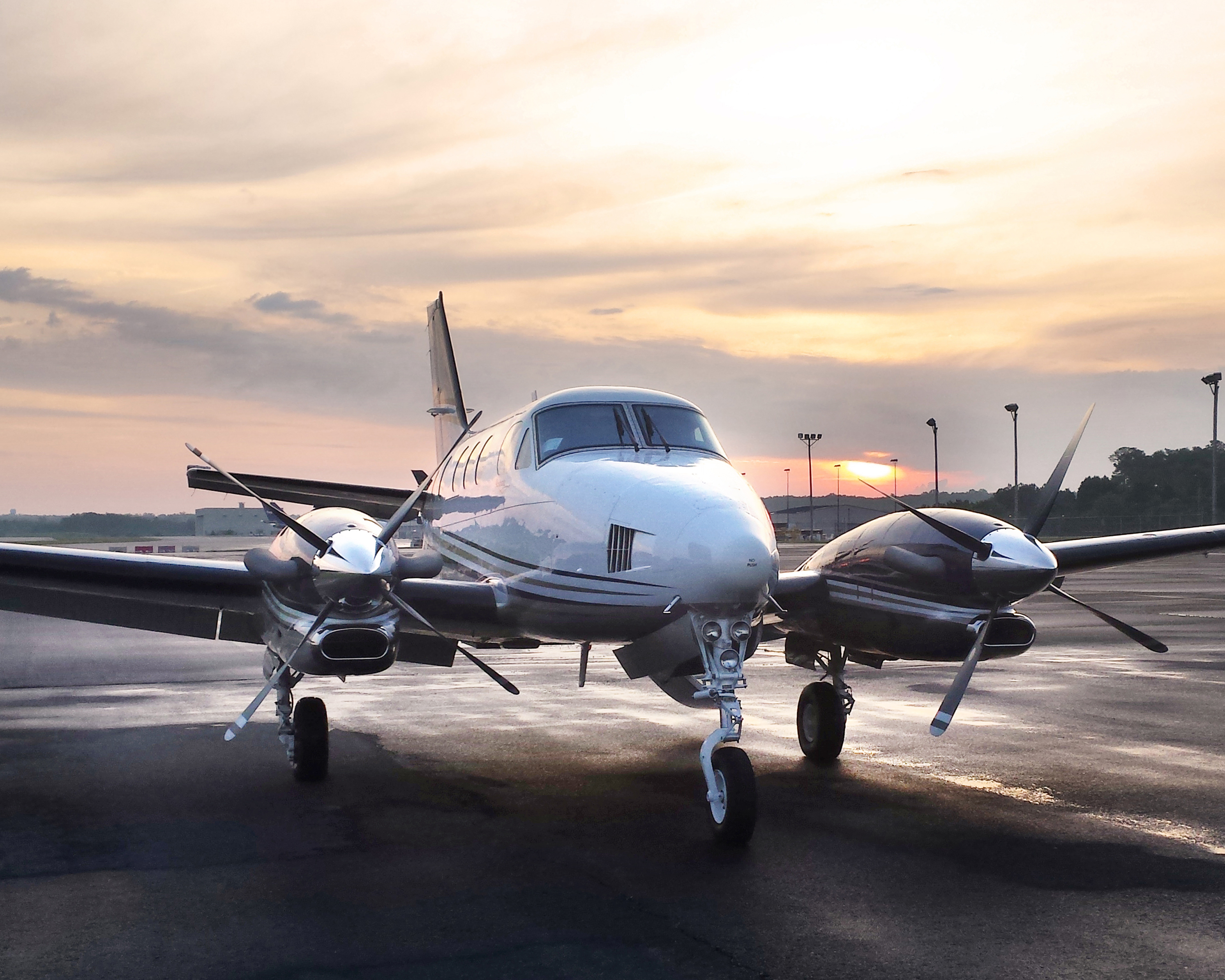 With the help of a plane, a high-powered camera, and the right weather conditions, it’s possible to photograph seagrass meadows without ever getting your feet wet. Aerial imagery collected in 2013 through a partnership with N.C. DOT Photogrammetry staff has been used to create a second seagrass map, building on an initial 2008 map created by APNEP in coordination with NOAA. N.C. DOT aerial photographer D.J. Griffin spends most of his time taking photographs of North Carolina’s roadway projects, but this seagrass mapping initiative takes him and the pilots who fly the N.C. DOT plane high above our estuaries. While the plane is in the air, the pilots make sure they are flying the correct route at the correct altitude while Griffin monitors the giant camera used for taking photos. “Basically, I’m a photographer,” explains Griffin. “The camera is just a little bit bigger and a little bit more complex in terms of how it interacts with the aircraft. I sit behind the pilot and copilot, and control everything that’s used for the imagery acquisition.” 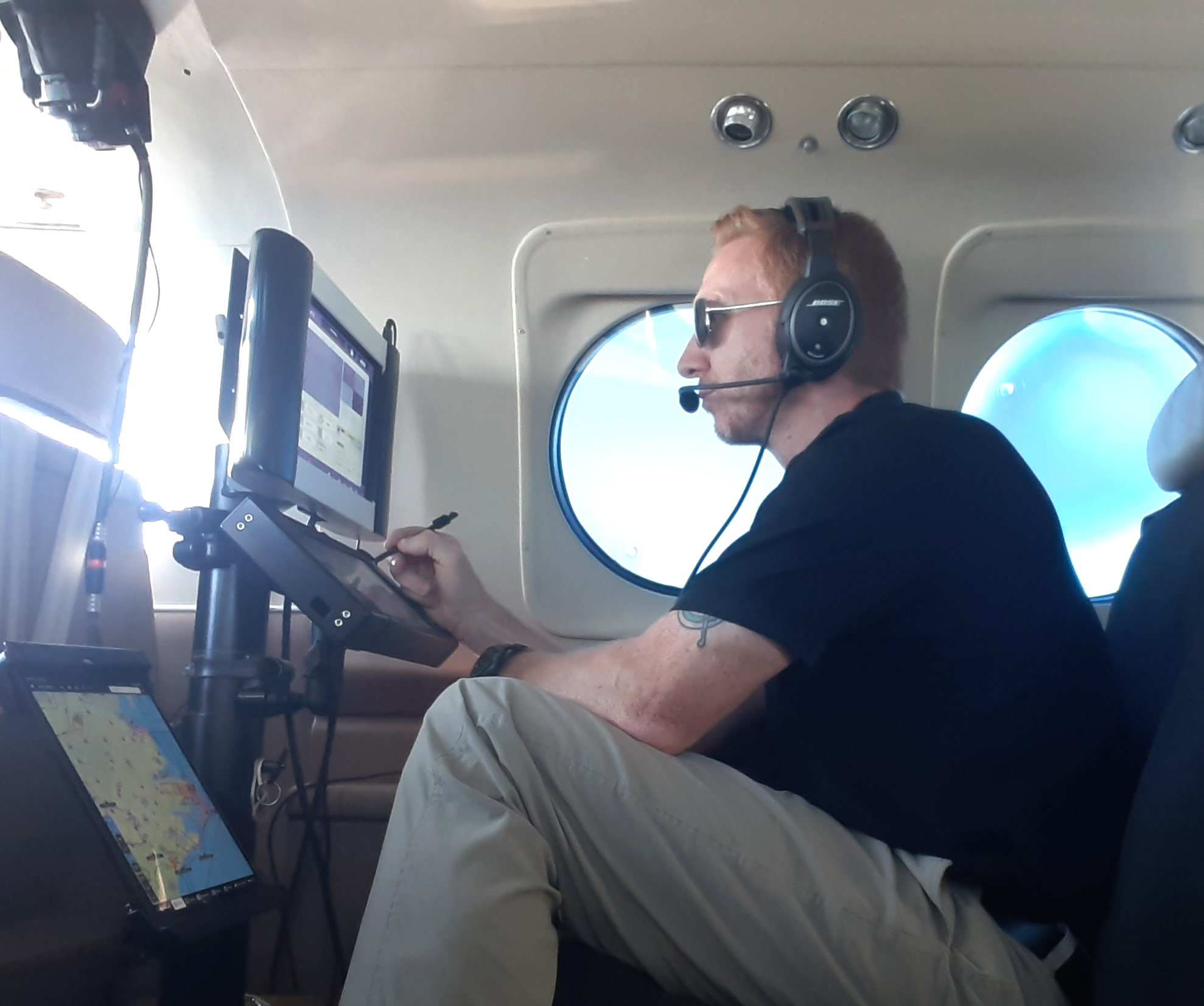 But without perfect climatic and water conditions, even the best camera won’t be able to make out the seagrass meadows that lie just under the water’s surface. Cloud cover, murky water, or even the angle of the sun’s rays as they reflect off of the water can make a successful flight impossible. Storms obviously prohibit flying, but even high, wispy clouds can cause camera interference. And time of year also has to be taken into consideration; since seagrasses grow seasonally, late spring and early summer are the best time to capture the extent of the three major seagrass species in our sounds. “With all those things together,” explains Griffin, “it’s like all the planets have to align and you have to have a small miracle to go get these photographs.”

Before they commit to a mapping flight, Griffin, his N.C. DOT colleagues, and APNEP’s Dean Carpenter work together to monitor the weather and water. Concurrently, APNEP Watershed Manager Trish Murphey coordinates a network of volunteers across the estuary who take daily measurements of water clarity and send them to APNEP. These measurements allow APNEP and N.C. DOT to know whether the water is clear enough to capture high-quality photographs. Storms and rainfall events upstream, for example, will significantly increase the murkiness of the water by sending mud and debris into the region's rivers and eventually the estuary downstream. To increase the likelihood that the aerial photos can be used to identify seagrass meadow locations as accurately as possible, boat-based teams also sample randomly chosen sites that are the right depth for seagrass growth. 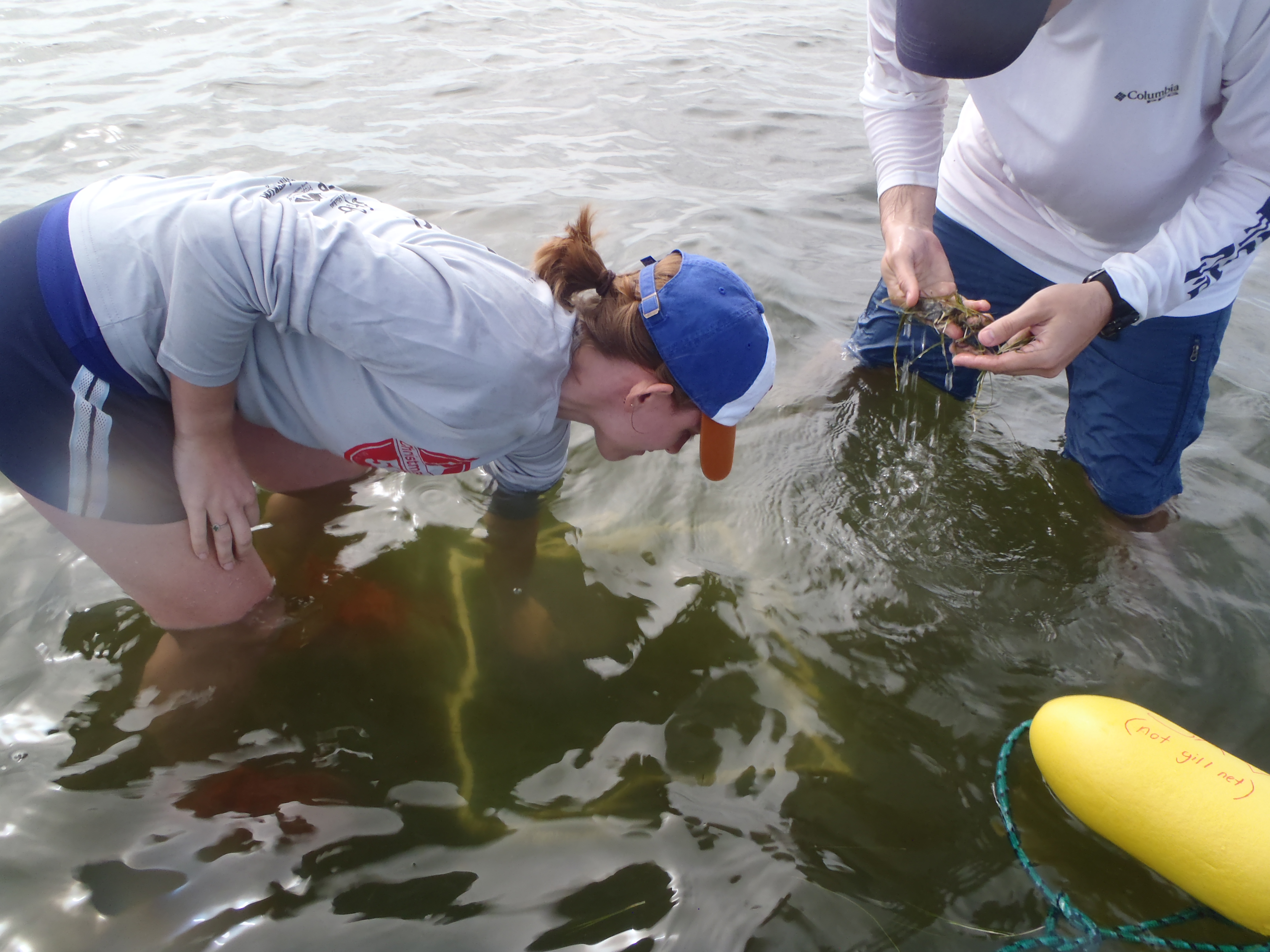 By combining the 2019-2020 map with information from earlier maps, APNEP and partners will be able to better understand if and why seagrasses in North Carolina are declining over the long term. Finding ways to protect this habitat is important not only for the many aquatic creatures that live in seagrasses, but also because these meadows, many of which lie behind the sound-side edge of the Outer Banks, help to stabilize the barrier islands themselves. “When I’m up in the air for a flight, I notice just how thin and fragile the Outer Banks are,” says Griffin. “From 11,000 feet, you see blue, and blue, and then a tiny little strip of sand. That viewpoint makes you realize that the ecosystem is so fragile. I think these flights are the hardest job we do, but they’re also one of the most rewarding.”

Read our other Soundings Blog posts about APNEP's efforts to protect underwater grasses: 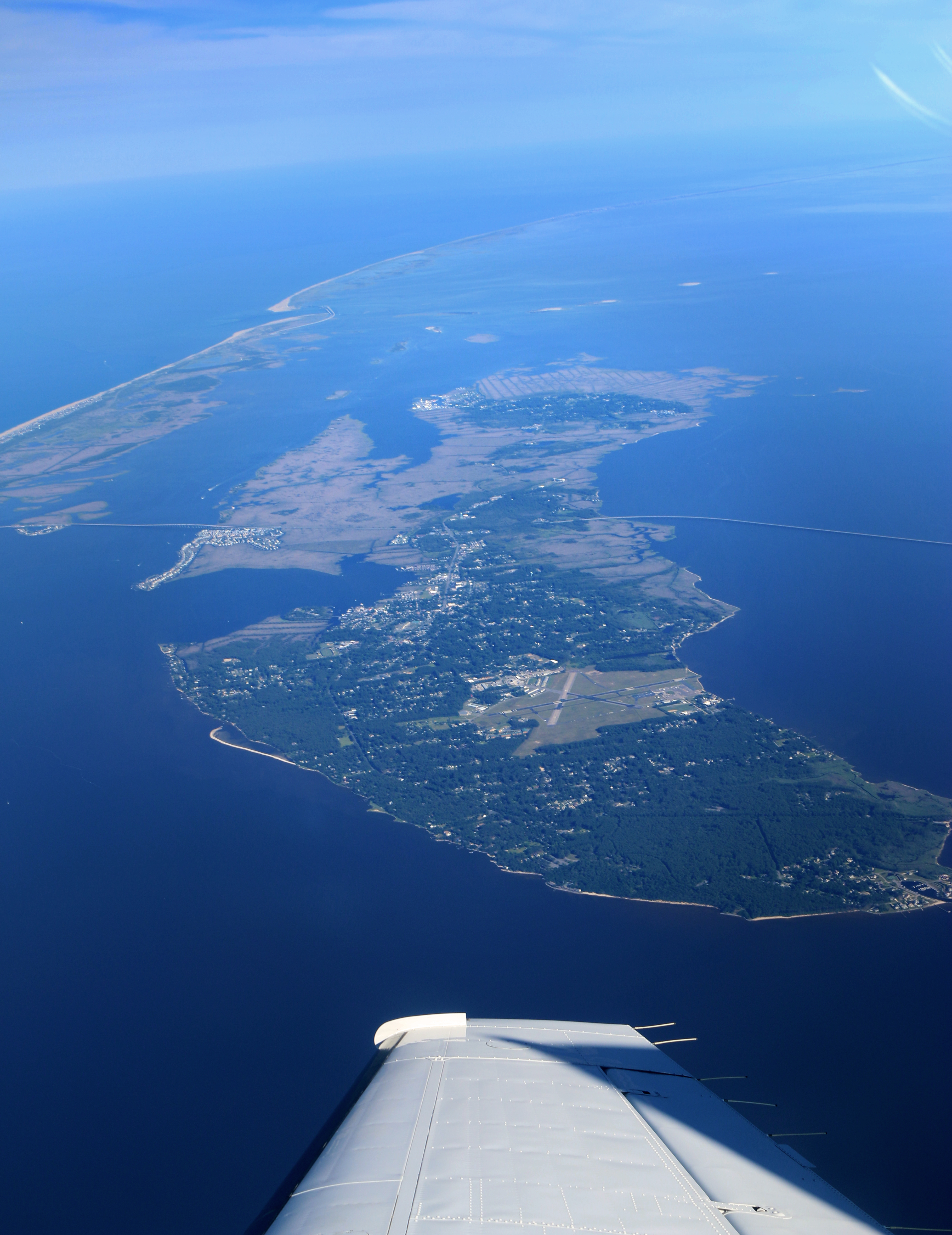