Most of us are familiar with North Carolina’s grassy meadows, fields, and lawns, but did you know that our state’s coastal rivers and sounds harbor underwater meadows of their own? Many North Carolinians have no idea that these underwater grasses – also known as submerged aquatic vegetation (SAV) or seagrasses – are actually one of North Carolina’s most valuable, and fragile, aquatic resources.

As it turns out, SAV plays a crucial role within our coastal ecosystems, with a single acre of grasses supporting as many as 40,000 fish and 50 million small invertebrates. “Submerged aquatic vegetation is misunderstood because a lot of people look at it as a nuisance when they’re boating or fishing,” explains Jimmy Johnson, APNEP’s Coastal Habitats Coordinator. “If they could understand how critical it is for North Carolina’s fisheries, they might be a little more understanding when SAV gets entangled in their boat props.”

In addition to providing habitat for creatures such as blue crabs, scallops, shrimp, and juvenile fish, these underwater meadows improve water quality by absorbing excess nutrients and generating oxygen. Grasses decrease wave energy, helping to protect shorelines from erosion, and their roots increase water clarity by holding sediment in place. These ecosystem services make seagrasses one of the most valuable habitats on the planet. 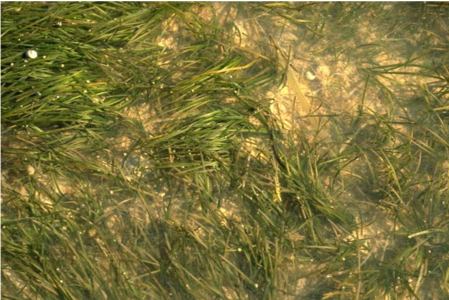 Because of how North Carolina’s barrier islands shelter our sounds from wind and waves, the Albemarle-Pamlico region has more than 136,000 acres of submerged aquatic vegetation – putting it in the top three states in the country for SAV abundance. This estuarine system also contains half of the juvenile fish habitat from Maine to Florida, making the status of its SAV an issue of regional importance. It’s this unique resource that scientists and managers, including those who are part of the Albemarle-Pamlico National Estuary Partnership’s (APNEP’s) multiagency Submerged Aquatic Vegetation Team, are working together to protect.

Since 2001, an Albemarle-Pamlico SAV partnership has collaborated with the long-term goal of determining where the region’s underwater grasses are located and if their overall extent and density is changing over time. It’s important to monitor underwater grasses “because worldwide, SAV is demonstrated to be one of the best indicators of coastal environmental quality,” explains Dr. Jud Kenworthy, retired NOAA Ecologist and the lead member of APNEP’s SAV Team. “SAV is a canary in the coal mine. When it’s there and healthy, the environment is likely to be in good condition. When it’s gone, when it’s lost, in all likelihood something bad has happened in the environment.”

Before APNEP’s SAV Team started coordinating efforts to map and monitor the region’s submerged aquatic vegetation, there were no long-term SAV monitoring programs in North Carolina that could provide reliable information about how this resource has been changing over time. The multiagency partnership, which includes representatives from state and federal government agencies, academic institutions, and non-profit organizations, seeks to pool resources in order to better monitor and protect SAV. “We have Team members working in different disciplines – fisheries scientists, basic ecologists, and folks interested in mapping and monitoring tools,” says Kenworthy.

The Team’s goals derive from APNEP’s Comprehensive Conservation and Management Plan, or CCMP, and focus on protection and restoration of the region’s SAV. So far, their priority has been mapping the region’s SAV so they can determine if and where action needs to be taken. “If we can’t document how things were and how they’re changing, we’re flying blind,” says Dr. Dean Carpenter, APNEP’s Program Scientist. Protecting the region’s current SAV is critical, since it’s far less expensive to preserve this resource than it is to replant and restore SAV once it has disappeared. 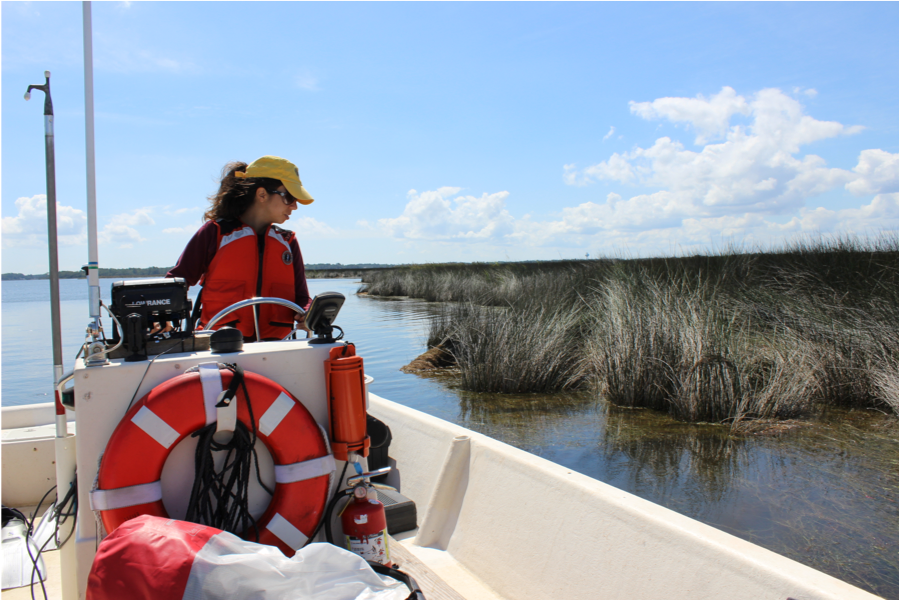 The partnership has already taken its first steps toward assessing the extent of underwater grasses in the region. In 2011, the SAV Team published a baseline map of submerged aquatic vegetation using aerial flight data from 2006 through 2008, and in 2019 will be publishing a follow-up map based on data from 2013 through 2014. During the summer of 2019, SAV Team members and partners, including the NC Division of Marine Fisheries and NC Department of Transportation, are working together to conduct aerial surveys and collect the groundtruthing data needed to create a third map of the resource. These three maps will help the group to analyze how the extent and density of underwater grasses has changed over the past decade, as well as to determine if there are any areas where SAV has been disappearing.

In addition to aerial mapping, APNEP’s SAV Team has worked together over the past decade to develop protocols for coordinating data collection across the region. Since 2014, East Carolina University researchers and other SAV Team members have monitored SAV in the low-salinity waters of the sounds via boat-based surveys that use underwater sonar, cameras, and square quadrats to collect SAV data at ‘sentinel sites’ over time. In the long term, the goal is for the combination of semi-decadal aerial surveys of the higher salinity waters near the barrier islands and more frequent boat-based surveys throughout the region to allow the SAV Team to obtain an ongoing assessment of how the state’s submerged aquatic vegetation is changing over time.

“Maintaining the SAV monitoring programs and developing them to full capacity is really essential,” says Kenworthy. For the SAV Team, this includes incorporating collection of species composition data into their monitoring protocols, as well as the establishment and maintenance of an SAV Sentinel Site Network that will be monitored collaboratively. Equally critical is recognition of the importance of underwater grasses in local, state, and federal policies. 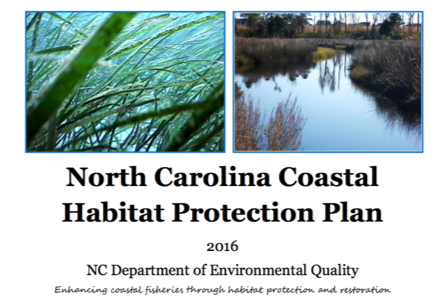 “One state policy that recognizes the importance of SAV is the Coastal Habitat Protection Plan [CHPP], a document used by the NC Department of Environmental Quality to guide water quality decisions as they relate to fisheries,” explains Johnson.  “Within the CHPP there are six habitats identified as significant for the reproduction and life cycle of specific fish, and I think it can be easily argued that SAV is one of the most important of the six.”

One challenge that the SAV Team faces is figuring out how to find the financial and logistical resources to implement their monitoring plan. “We need to find the resources to move forward,” says Kenworthy. He believes that the Team’s greatest accomplishment so far is sustaining the work to develop and implement a statewide SAV monitoring program, but that in the long term, it is ultimately unsustainable without increased funding. The fact that North Carolina harbors such an abundance of SAV is a huge benefit to our estuaries and coasts, but also means that human impacts on water quality throughout the watershed, from the Piedmont through the Coastal Plain, affect that resource.

While many factors contribute to SAV decline, in the Albemarle-Pamlico region the threat is “probably first and foremost due to the anthropogenic modification of the watersheds and shorelines,” says Kenworthy. “Things like stormwater runoff, excessive sediment erosion, and human modification through land development. Another threat on the horizon is the possibility of expanding aquaculture in the APNEP region – there are a lot of opportunities for interaction between the types of aquaculture being proposed and the wellbeing of SAV. We know from a lot of research, what’s been done in the Pacific Northwest and other locations, that there could be negative impacts for SAV.” Invasive SAV species, such as alligator weed, Eurasian watermilfoil, and Hydrilla species, threaten to crowd out native species. In addition, potential climate change impacts to SAV species composition and abundance have yet to be determined.

Each of us can help to protect SAV, whether we live within sight of a seagrass meadow or hours inland. Avoiding overuse of fertilizers, pesticides, and herbicides in our homes and gardens makes a difference in water quality far downstream. Boaters can avoid tearing up shallow grass beds with boat props, avoid bottom-disturbing fishing gear that rips up SAV, and utilize the NC Clean Marina Program. State and local government efforts to reduce nutrient and sediment pollution, as well as stormwater runoff, also go a long way towards creating the conditions SAV needs to flourish.

“Whether or not you live within sight of the sounds, we all benefit from our state’s coastal submerged aquatic vegetation,” says Carpenter. “We can all be caretakers of these underwater meadows, and we all need to work together to ensure that SAV is appreciated for the unique and valuable resource that it is.”