Can anyone be a scientist? Contrary to our stereotypes of science as something that happens in sterile labs or grey-stoned universities, advocates for citizen science respond to this question with an emphatic yes. The idea behind citizen science is that anyone can contribute to scientific research; in fact, science is enriched by the diversity of perspectives and experiences that citizen participants bring to the table. From assembling proteins to counting birds, citizen scientists in recent years have been contributing data to a wide variety of research projects.

One citizen science group in northeastern North Carolina, the Chowan-Edenton Environmental Group (CEEG), has been working alongside researchers to monitor the potentially harmful algal blooms that have returned to the Chowan River and Albemarle Sound. The CEEG’s dedicated volunteers have become active partners in this algal bloom research through applying for research funding, developing research questions, and identifying local needs and priorities. The group’s efforts have contributed to science that meets the needs of researchers as well as area residents, and shows how place-based, community-driven citizen science can empower communities to play a vital role in addressing environmental issues.

For Colleen Karl, Chair of the CEEG, citizen science and community empowerment go hand in hand. “It’s the right time for organizations like the CEEG, small community organizations, to stand up, raise our hand, and say we’d like to be involved at a much deeper level than just passing out flyers,” says Colleen. “I think people are willing to do that, I really do.”

When algal blooms began to reappear in 2015 after a decades-long absence, the CEEG immediately became focused on investigating the blooms. The group’s ability to quickly examine and take samples from the shifting blooms has been invaluable to their agency and academic partners. So too has been their knowledge of the concerns and priorities of area residents, which has informed the focus of both research and outreach. From coordinating a public forum about the blooms to ongoing efforts to develop educational tools and signage, the Chowan-Edenton Environmental Group is working to make sure that research findings feed back into their community. “I would say that’s number one when we talk about new projects – what are we going to learn and how is it going to benefit our community?” explains Colleen. 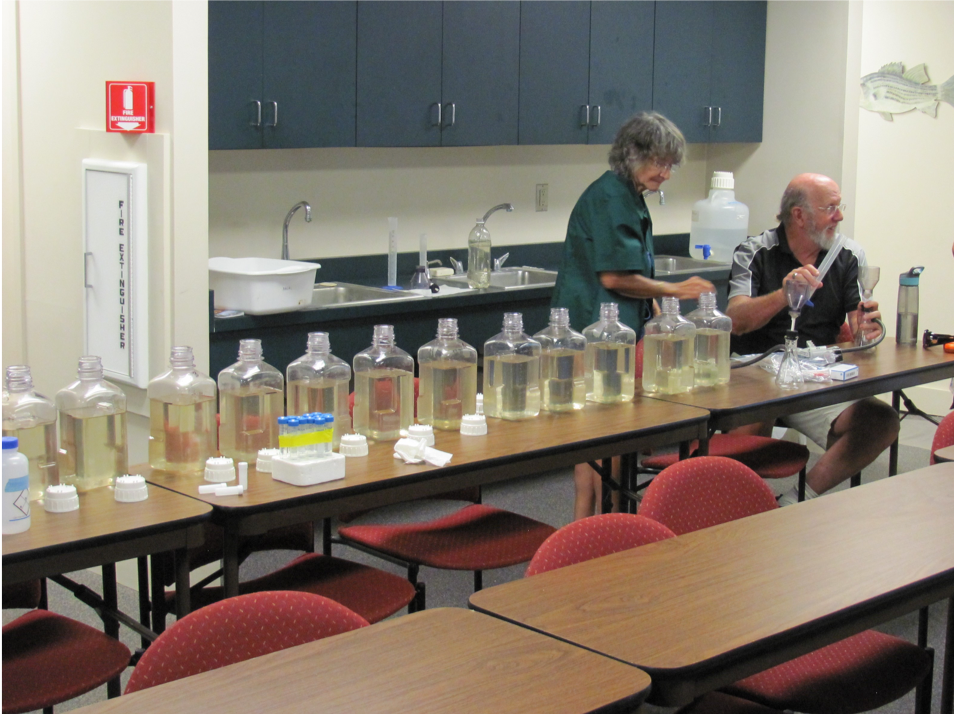 This sense of agency is at the heart of the CEEG’s success. “That’s the key to citizen science,” explains Colleen, “so many times it’s somebody else’s data. What’s really interesting about the CEEG is that the folks that are involved in it are actually some of the decision makers who shape these research projects. I’ve done a lot of citizen science in my day, and most often it’s top down – here’s what we have and here’s what you’re going to do. You cross off a box and you’re done.”

The Chowan-Edenton Environmental Group takes a different approach – its members play an active role in deciding what research projects are right for them and the residents of their communities. “There is a lot of dialogue that goes back and forth [between CEEG members and researchers] to help shape some of these research projects,” says Colleen. “It keeps the interest level high in the folks that are in the CEEG, because it’s their project as much as it is the researcher’s project.”

Colleen hopes that the CEEG can help other local environmental groups in North Carolina see citizen science from this ‘bottom up’ perspective. The group would like to translate their approach as a close-knit group of citizen scientists who partner with research organizations, share data, and learn together for other environmental organizations, but they also recognize that this is easier said than done.

“It’s really hard,” says Colleen, “you don’t just walk into another community and say, ‘Hey! Here’s what we’re doing, do you like it?’ But we’re trying to reach out more and do outreach programs across the state about what we do and how it works for us.” While tackling even just the Chowan River’s environmental issues is impossible for CEEG alone, the group’s members hope that they can eventually foster a network of community-based environmental groups across the region. “It’s going to take that to get stuff done,” says Colleen. “Without a doubt we’re chipping away, but we’ve got a long way to go.”

At the end of the day, what motivates the CEEG members is making sure that the natural diversity and cultural heritage of the region are preserved for the people who live there. “We all have different interests, but it comes down to protecting the beauty and the assets of this whole area,” explains Colleen. “We have a lot to be thankful for in this part of the world and we all really appreciate it.”

Interested in getting involved with the Chowan-Edenton Environmental Group? Check out their current initiatives on the CEEG Facebook page, and send them a message to learn more! If you live outside of northeastern North Carolina, view our list of citizen science programs throughout the state or our map of volunteer opportunities.