Partnering for Oyster Restoration and Protection

APNEP has partnered with a diverse group of stakeholders involved in growing, harvesting, studying, managing and eating oysters to protect and restore North Carolina's oyster habitats and fishery. The Oyster Restoration and Protection Plan for North Carolina: A Blueprint for Action 2015-2020, led by the N.C. Coastal Federation, provides current and future stakeholders with cohesive direction and guidance. This will allow them to come together as a united force to implement restoration, management and economic development strategies to produce tangible benefits to the environment and economy.  These efforts are integrated with those of APNEP's Oyster Habitat Restoration Action Team.

Highlighted findings and facts from the Blueprint for Action include:

The people of eastern North Carolina have a deep and historical connection to the oyster reefs of the Albemarle Pamlico sound.  It has historically been a large and profitable resource, with 800,000 bushels (5.6 million lbs) being harvested in 1889.  Through overharvesting, habitat loss, disease, and pollution, that number dropped to 35,000 bushels in 1994. With recovery efforts beginning in earnest, those numbers have seen a major increase recently, though the harvest numbers are nowhere near the historical highs.  If oyster harvesting is to become a major part of North Carolina’s coastal markets once again, strong commitments to conservation efforts must be made by government and businesses alike.

Some of the current efforts include building artificial reefs, spreading cultch (material to which oyster larvae attach) and prohibiting harvesting in deep water oyster sanctuaries in the Pamlico Sound.  Another strategy being implemented is strengthening the oyster mariculture industry, which can relieve strain on the wild population and grow the economic value of this industry.

Another accomplishment of this partnership is the 2016 release of the APNEP-funded report "Economic Analysis of the Costs and Benefits of Restoration and Enhancement of Shellfish Habitat and Oyster Propagation in North Carolina," prepared by RTI International.  The report assists in documenting how habitat enhancement projects in North Carolina improve the coastal economy and environment by assessing the benefits and costs of the three oyster programs under the N.C. Division of Marine Fisheries' Shellfish Rehabilitation Program, Oyster Sanctuary Program and Artificial Reef Program. With just $20 million in government and private investments between 2010 and 2015 evaluated in the report, North Carolina restoration and habitat enhancement activities supported over 500 acres of habitat and provided economic benefits to commercial fishing, recreational fishing, and water quality services such as nitrogen removal and shoreline stabilization.

The economic analysis demonstrated that every $1 invested in the coastal habitat enhancement programs yields $4 in benefits. Produced expected benefits ranged from $2 to upwards of $12 for every dollar invested. 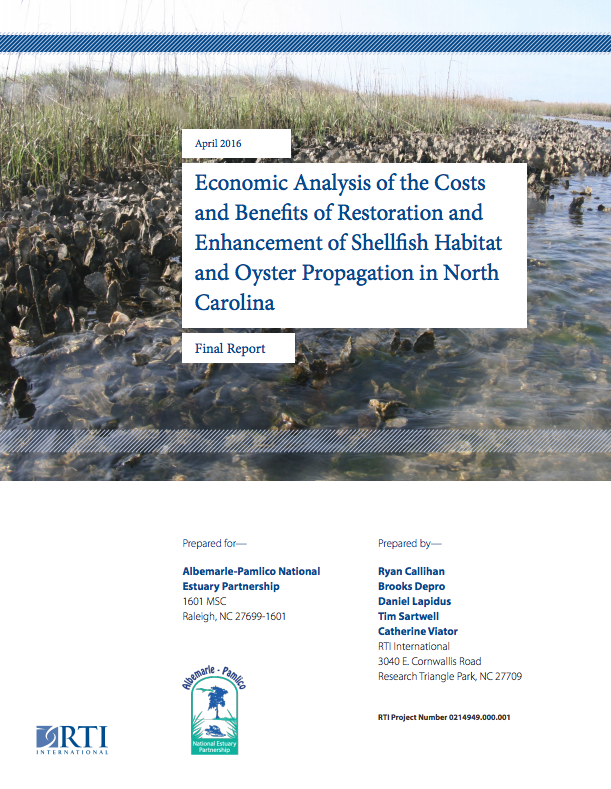 The North Carolina Coastal Federation hosted a Sound Economic Development Summit in 2017. APNEP helped to sponsor this event, which brought together local and state government officials, engineers, developers, business leaders, shellfish growers, scientists and more to learn how North Carolina could tap into its coastal resources to boost the state’s economy. In 2019, APNEP also helped to sponsor a follow-up 2019 North Carolina Oyster Summit, focusing on the future of oysters in the state.