Living shorelines are a suite of shoreline stabilization techniques that use live components such as marsh plants or oyster reefs, either independently or in combination with hard structures like rock sills. According to the N.C. Coastal Habitat Protection Plan (CHPP), wetland and shell bottom habitat along the state’s shorelines have declined in many areas due to natural erosion and shoreline hardening strategies like bulkheads. Living shorelines are an alternative way to protect waterfront property while restoring fish habitat and ecosystem services. Since 2005, scientific studies have made progress documenting the benefits and limitations of living shorelines. Research in North Carolina has shown that living shorelines support a higher diversity and abundance of fish and shellfish than bulkheaded shorelines, effectively deter erosion, and resist storm damage.

Several researchers and practitioners are currently examining the impacts of Hurricane Florence and Tropical Storm Michael on living shorelines and other shoreline types.  These researchers are members of the Research Subcommittee of the APNEP/NC Coastal Federation-led Living Shorelines Action Team. The team is made up of a diverse group of stakeholders, working together to coordinate education, implementation, research, and monitoring of living shorelines in North Carolina.

These scientists are sampling a wide range of variables at different sites and comparing measurements from before and after Florence made landfall on September 14, 2018, as well as after Michael moved through NC on October 11th. These variables include before and after site photos, shoreline positional and elevation data, and vegetation and oyster assessments.

Through the next several weeks, APNEP will be posting the preliminary results of several assessments of living shorelines along our coast on our Soundings blog. Stay tuned for the next installment!

This project is an experimental assessment of marsh-fringing oyster reefs constructed with a new biodegradable material called Oyster CatcherTM. Thisplant fiber substrate promotes oyster growth both by attracting oysters to pre-seeded spat and providing a hard, stable substrate for attachment. The performance of these Oyster CatcherTMmaterials will be compared to that of another living shoreline substrate, consisting of oyster shells in plastic mesh bags.

Scientists from ECU and NERRs compare the two living shoreline construction materials and a natural shoreline (no construction) to each other by looking at shoreline position and elevation, marsh vegetation coverage, and oyster coverage. They hope that the project will provide information on the efficacy of different building materials, while at the same time restoring eroding salt marsh in the Rachel Carson Reserve. All photos were taken by Rachel Gittman, Emory Wellman, and Brandon Puckett. 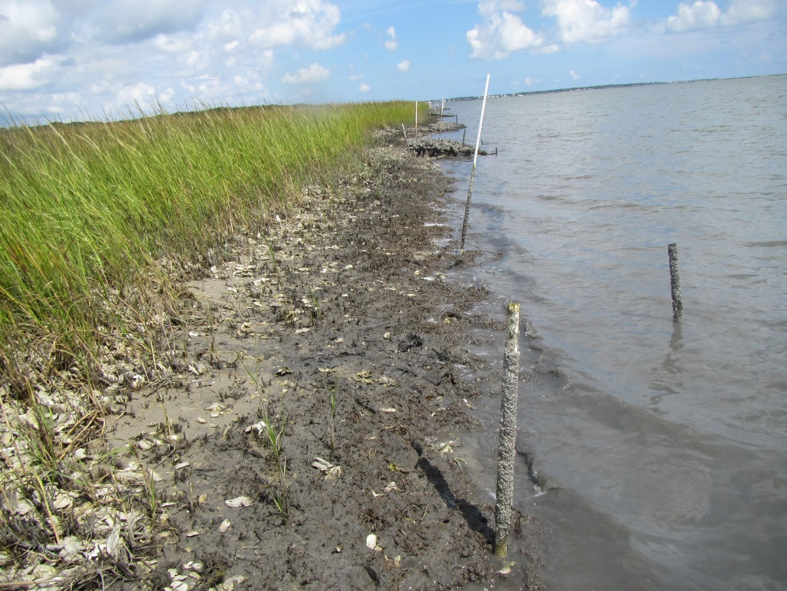 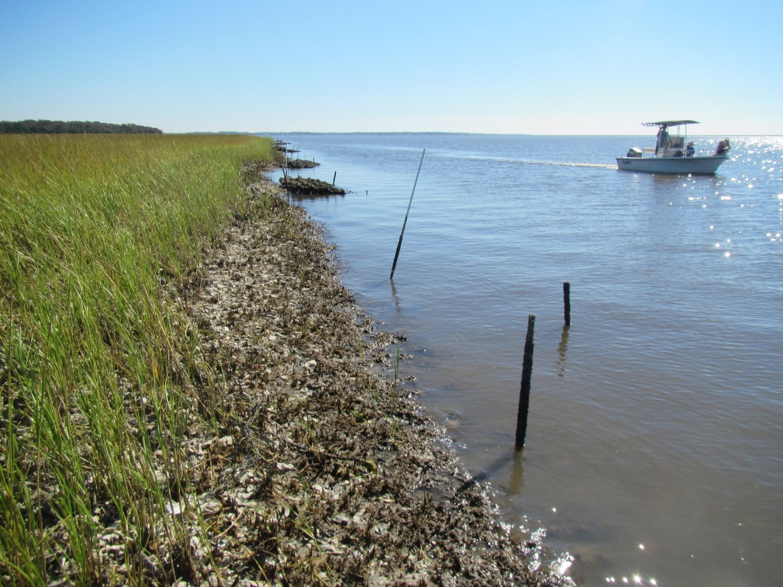 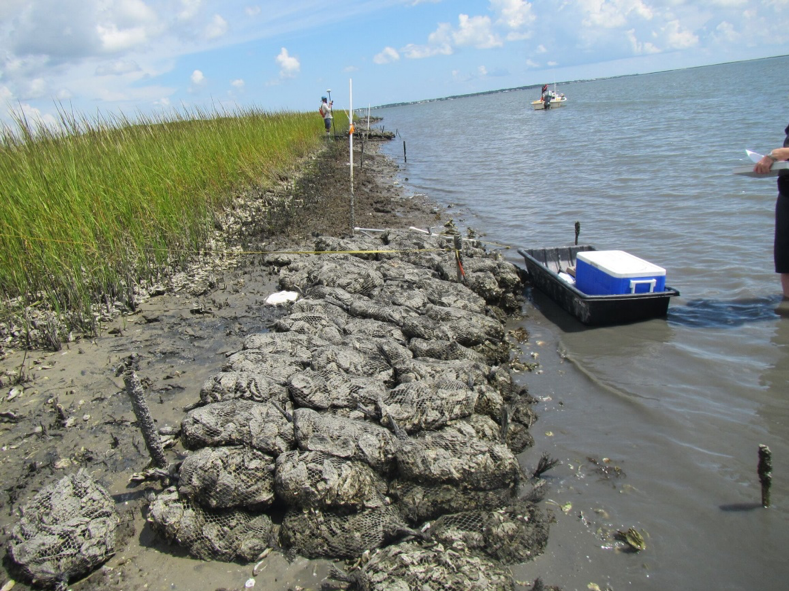 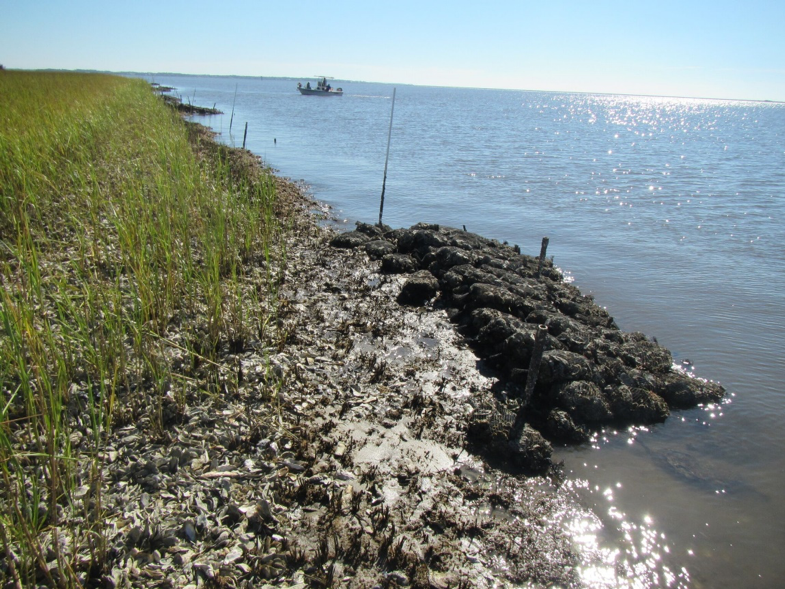 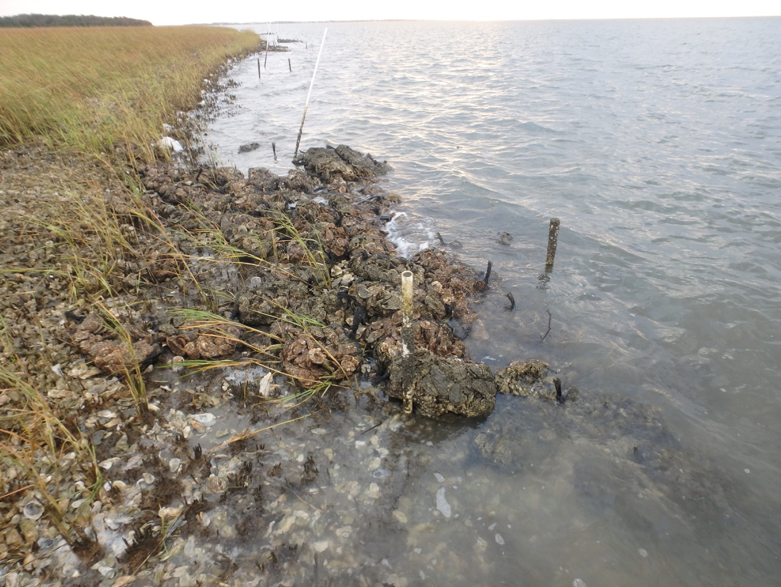 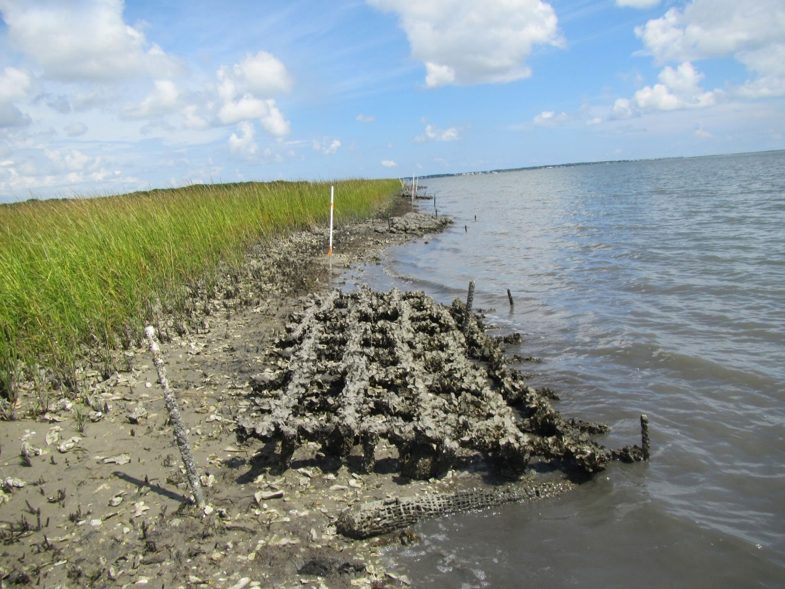 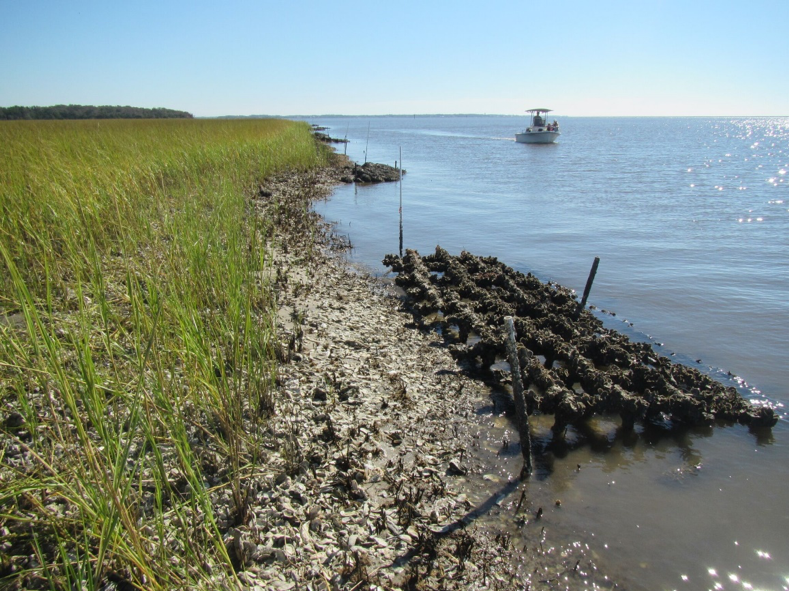 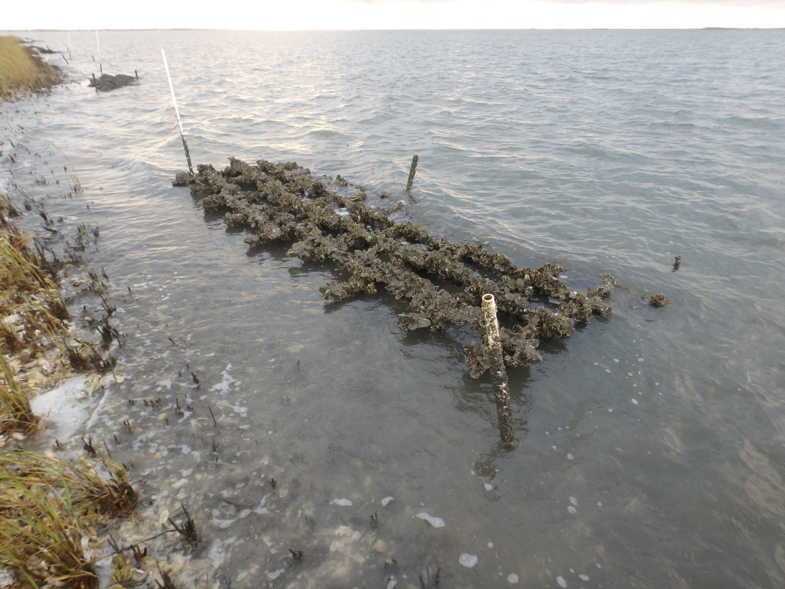 Overall, there were some slight impacts after Florence in each of these three examples. There was more loose shell cultch present in the marsh post-Florence compared to the pre-Florence. Possible explanations of this may be the storm deposited cultch or washed away sediment and exposed cultch which may have previously been buried. Pre- and post-storm marsh vegetation monitoring revealed a loss in marsh plants across all three shoreline types. Based on past studies of living shorelines in NC, the researchers predict that marsh vegetation recovery will be enhanced by the presence of the reefs, but that recovery will not be assessed until next summer during the period of peak marsh biomass production.

Both the oyster shell bag and Oyster CatcherTM remained intact with no visible damage to the reefs as a result of Florence. In contrast to Florence, Michael pushed many of the oyster shell bags off the reefs and into the marsh, while the Oyster CatcherTM reefs again remained intact. Florence produced a significant storm surge, while Michael did not, likely resulting in the reefs being submerged during Florence and being partially exposed to waves during Michael. This difference in wave exposure is one potential explanation for the differences in bag reef performance across the two storms.