When Raleigh’s Milburnie Dam was removed in November of 2017, its demolition didn’t make nearly as much of a splash as the removal of Quaker Neck Dam, the first dam in the United States removed purely for environmental reasons, had back in 1997. News coverage was from local media outlets; the small crowd of watchers didn’t include an agency Secretary or utility company CEO. But in fact, the small turnout was a testament to the success of Quaker Neck and subsequent projects in normalizing the idea of dam removal. “Quaker Neck allowed the people of North Carolina to see what a dam removal was like and to get comfortable with the process,” says Mike Wicker, Coastal Program Coordinator for the US Fish and Wildlife Service (USFWS).

This is true not only of North Carolina, but of the entire United States. In his article “The Dawn of Dam Removal”, former Secretary of the Interior Bruce Babbit wrote, “The success at Quaker Neck brought national press and began to turn public opinion. Across the country local communities came up with proposals, and dams began to come down – at Kennebec in Maine, along the Baraboo River in Wisconsin, the Rogue River in Oregon, and the Butte and Clear Creeks in California. In the space of two decades, dam removal has evolved from a novelty to an accepted means of river restoration.”

The Times, They Are A Changin’

As the number of dam removals has increased, the means of accomplishing them has shifted. “One thing that was more of factor at Milburnie than at Quaker Neck was the whole mitigation aspect,” says Wilson Laney, USFWS  Senior Biologist for Fisheries and Ecological Services, and member of APNEP’s Science & Technical Advisory Committee Executive Board as well as APNEP’s Policy Board. “At Quaker Neck, you had a corporate entity that owned the dam, that got a direct benefit from the removal of the dam by elimination of operation and maintenance costs and of a liability, as well as the public relations benefit of making a major contribution to the restoration of a river system. At Milburnie, you have a somewhat different situation in that you have a private enterprise, Restoration Systems LLC, acquiring the dam for the purposes of starting a mitigation bank so they will hopefully profit from that endeavor.”

Mike Wicker sees these public-private partnerships as a great way to remove some of the most difficult dams, in terms of funding, public opinion, or otherwise. “There are some companies, and I think Restoration Systems is one of them, who are in the private sector but have a strong environmental ethic,” he says. “This gives them the means and resources to tackle expensive dam removals, as well as increased support from political groups that might be opposed to a government agency removing the dam.”

All Spawning Habitat is Not Created Equal

The removal of Milburnie and Quaker Neck Dams, both on the Neuse River, have helped to open up thousands of miles of waterways to migratory fish, allowing them to reach historic spawning habitat upstream. And although the removal of Milburnie Dam hasn’t impacted as many miles of the Neuse as the removal of Quaker Neck, it might have an equally important impact on fish spawning. “If you look at spawning requirements for Striped Bass, American Shad, and Atlantic Sturgeon, the fourteen miles of habitat upstream of Milburnie is probably more valuable from a habitat perspective [than the downstream portion of the river],” says Wilson Laney. “It’s because of geological factors – you have more bedrock, cobble, and gravel upstream, and that’s a better spawning habitat for these fish species.”

Dr. Joe Hightower, whose research group conducted field surveys to characterize the river bottom from the mouth of the Neuse River to the base of Falls Dam, agrees. “The river changes as you go upstream,” he says, “and the habitat near Falls Dam [upstream of Milburnie] is unlike anything further downstream. If there is enough spring flow, American Shad and Striped Bass will keep going upstream until they reach that habitat found in the transition from Coastal Plain to Piedmont.”

The Future of Fish Passage in Eastern NC

For Wilson Laney, dams remain a major issue, in addition to culverts that impede fish migration and passage. “River herring and shad in particular don’t like to go through dark culverts,” Wilson explains. “There may not be a physical barrier there, but there’s a light barrier. The NC Division of Marine Fisheries has done some work to go out and sample above and below culverts and has created a culvert database for northeastern North Carolina, which is the historic epicenter of river herring populations. They have been working with the [North Carolina Department of Transportation] to try and address the issue.”

Mike Wicker’s end goal is to make fish migration possible from North Carolina’s sounds all the way upstream to the piedmont. “I think it’s really important to get into each river basin, to make sure fish can get up to that geologic strata which also contains most of the historic distribution of anadromous fish spawning habitat. I think the next huge opportunity is the Cape Fear River, which flows out of Jordan Lake. The river has 3 lock-and-dams downstream, and then you’ve got Buckthorn Dam which is owned by Duke Power. If those dams had fish passage or removal, either one, that would put the Cape Fear where the Neuse is now.” 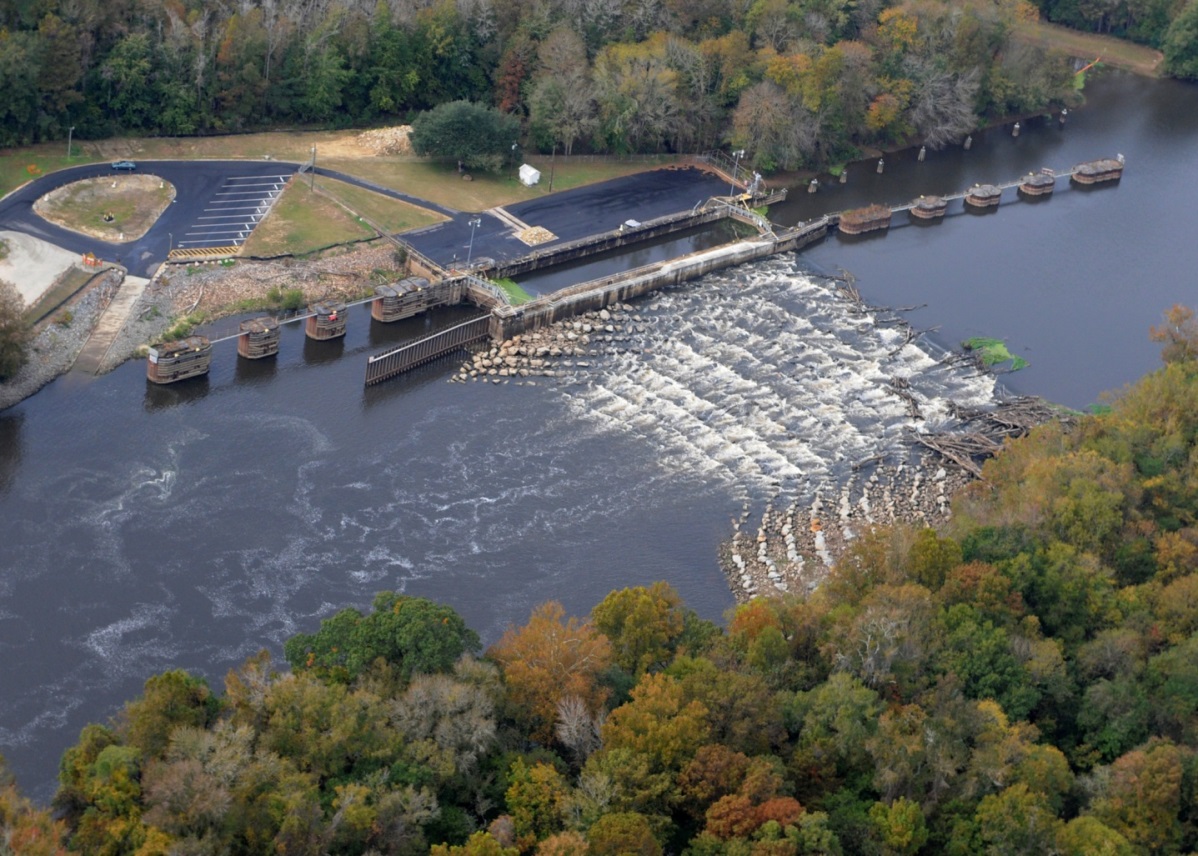 Progress is already being made - the furthest-downstream lock-and-dam already hosts a fish passage project, although the state of North Carolina has contracted with the Cape Fear River Watch (CFRW) to modify it in hopes of increasing the numbers of Striped Bass utilizing it. CFRW is also coordinating with local, state, and federal groups to evaluate fish passage at the other two locks and dams. Frank Yelverton, Executive Director of CFRW, hopes to balance the desire of biologists and conservation groups with the needs of communities such as Fayetteville, Fort Bragg and Smithfield Foods, which utilize the locks and dams for water supply and storage. “Unless we address the issue of water supply, it’s not feasible to realistically evaluate fish passage alternatives including dam modifications or removal,” he says. Regardless of whether an eventual fish passage project is private, government-funded, or somewhere in between, the underlying mechanism will be success through collaboration. As Mike Wicker says, “It’s not anyone’s individual effort. It’s the process of research and coalition-building that makes a dam removal project work.”