With the demolition of Raleigh’s Milburnie Dam in November 2017, the Neuse River now flows freely from Falls Lake to Pamlico Sound for the first time in over a hundred years. Safety concerns contributed to the dam’s removal, but the main reason for the removal of Milburnie was to enable fish such as American Shad, Striped Bass, and Atlantic Sturgeon to once again migrate from the ocean to their historic spawning habitat upstream of the dam.

Although dam removals can generate public opposition – at Milburnie, for instance, landowners with adjacent property protested the dam’s demolition – the knowledge that many migratory fish species benefit from access to upstream spawning habitat means that dam removal or fish passage projects are a priority for environmental groups across the United States. However, this wasn’t always the case.

Twenty years ago, when local, state, and federal groups set out to demolish another dam on the Neuse River, removing a large dam because of the ecological implications was unprecedented. The efforts by North Carolinians and partner groups to change this paradigm ended up not only reopening the Neuse River to fish migration, but also impacting dam removal policies nationwide.

The Neuse is one of North Carolina’s major rivers, flowing 140 miles from its headwaters in north-central North Carolina to Pamlico Sound and draining an area of about 2,400 square miles. Historically, the river has been an important habitat for many fish species, including American Shad, Striped Bass, sturgeon (Atlantic and Shortnose), river herring (Alewife and Blueback Herring), and Hickory Shad, that live their adult lives in the ocean and return to the rivers where they were born to lay their eggs.

North Carolina and the Neuse used to be home to thriving fisheries for these river-migrating, or anadromous, species. According to Hugh Smith’s 1907 “The Fishes of North Carolina”, more Striped Bass and American Shad were caught in North Carolina a century ago than in any other state. But as catches of these species declined dramatically throughout the twentieth century, North Carolina’s researchers and government agencies began to ask how they could restore these historic fisheries. Overfishing and water quality issues played a large role in population declines, but researchers knew this wasn’t the whole story.

Enter the Albemarle-Pamlico Estuarine Study (APES), the Albemarle-Pamlico National Estuary Partnership’s (APNEP’s) predecessor organization. APES was established in 1987 to fund applied research focusing on the environmental issues faced by the Albemarle-Pamlico region of North Carolina and Virginia, including declines in regional fisheries. One of APES’ first commissioned studies, “Obstructions to Anadromous Fish Migration,” concluded that dammed rivers in North Carolina’s Coastal Plain were keeping fish from migrating to their historic spawning grounds and had played a large role in population declines.

United States Fish and Wildlife Service (USFWS) Coastal Program Coordinator Mike Wicker remembers how reading the APES study after its publication directed his attention towards one dam in particular. “One of the roles of the USFWS was that we could identify and work to remove these anadromous fish blockages. It seemed really apparent, especially after seeing the APES report, that the Quaker Neck Dam closed off the Neuse River to fish migration,” says Wicker. 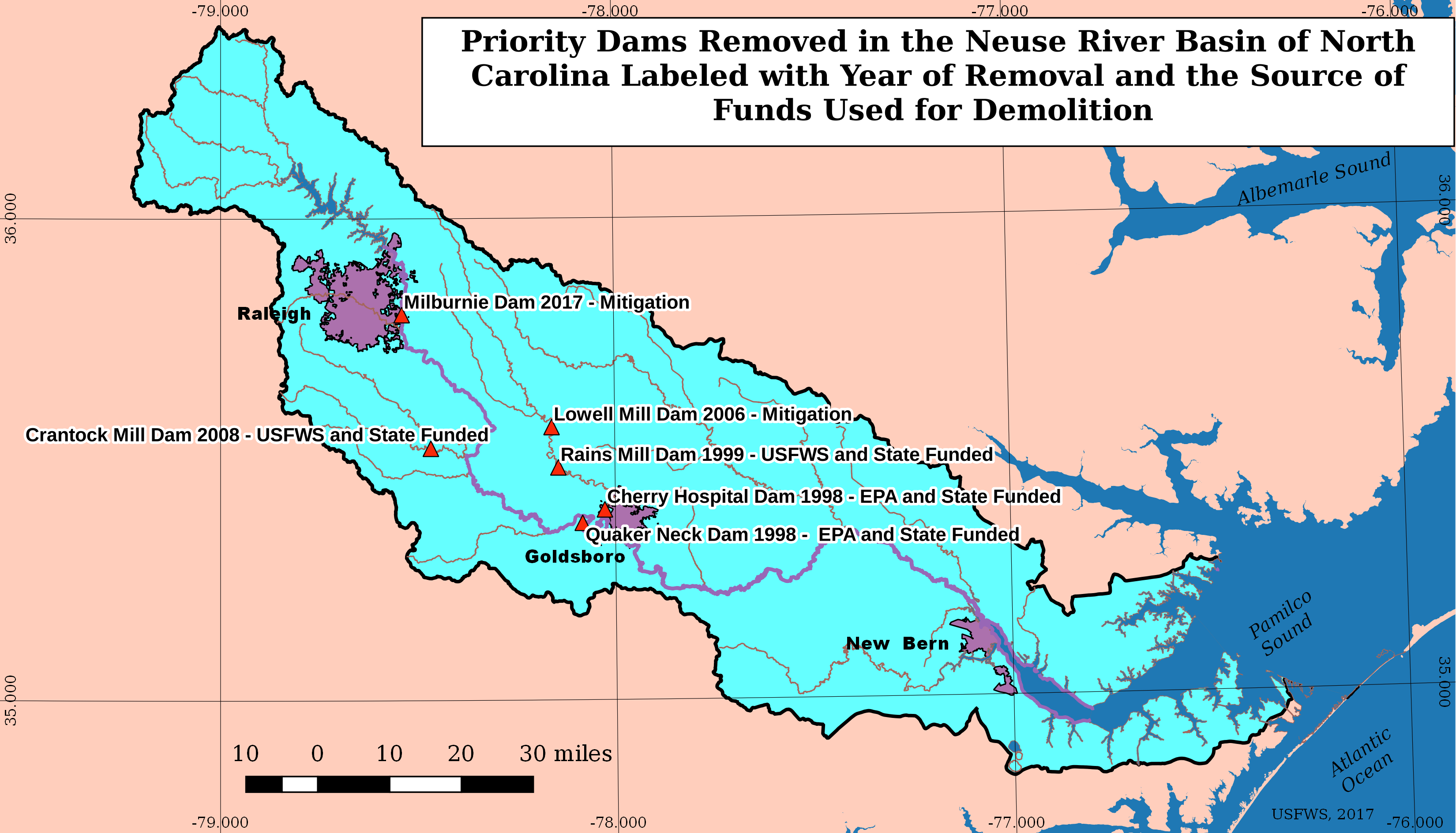 An Opportunity for Change

The Quaker Neck Dam was built a few miles west of Goldsboro in 1952 by Carolina Power & Light to provide cooling water for a steam-generating power plant. It was one of dozens of dams across the state, and one of several on the Neuse River itself. But Mike Wicker and others focused on Quaker Neck because it represented a unique opportunity - as the Neuse’s furthest-downstream dam, its removal would open almost 1,000 miles of waterways to anadromous fish migration.

In addition, “At the time, the Neuse was unlike a lot of the rivers up and down the eastern seaboard in that there were only a couple dams up to [Falls Lake in central North Carolina], so it was an opportunity to begin opening most of that up again,” says Wicker. An APES staff member at the time, the late Guy Stefanski, agreed. “The benefits of the project were enormous,” he stated in a later interview.

Data also supported the conclusion that the dam’s construction had impacted fish populations – catches of American Shad on the Neuse dropped from 700,000 pounds in the year prior to dam construction to 25,000 pounds in 1996. Other factors, such as water quality, overfishing, and habitat destruction were also to blame, but research by NC State University’s Dr. Joe Hightower and his students conclusively showed that fish were unable to get past Quaker Neck Dam to their spawning habitat further upstream. 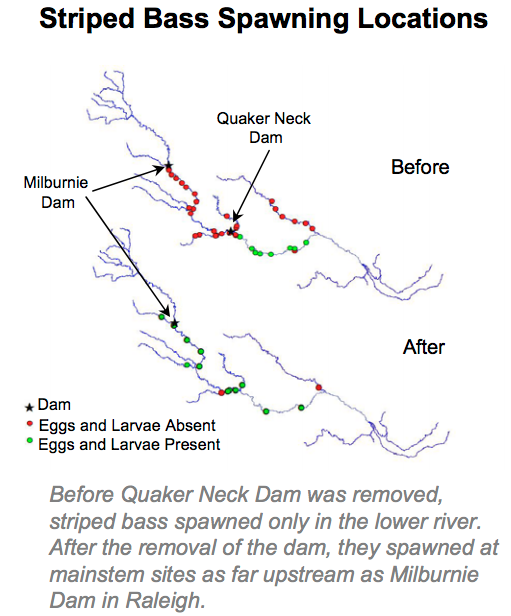 Dams had been demolished in the United States before, but Quaker Neck Dam’s removal would make it the country’s first large dam removal project purely for ecological purposes. Over the next several years, Wicker’s interest and the APES study paved the way for involvement by other institutions.

The partners involved, including the Army Corps of Engineers, US Environmental Protection Agency (USEPA), USFWS, APES, Coastal America, North Carolina Department of Environment and Natural Resources (NC DENR), NC Coastal Federation and various interest groups, worked together with Carolina Power & Light to remove the dam in a way that gave credence to all stakeholder concerns, including the power company’s stipulation that the dam removal not impact their ability to obtain river water for their cooling plant operations. After designation of the dam as a demonstration project by the federal Coastal America Program in 1991, the EPA awarded NCDENR a $100,000 grant to facilitate the removal of Quaker Neck Dam and nearby Cherry Hospital Dam.

To make potentially contentious projects such as dam removals possible, Wicker emphasizes the need for mutual respect and listening. “As things went along, you saw what needed to be done and worked together to do it,” recalls Wicker, who was the project’s primary lead for the USFWS. “If somebody could do something, they did it as best they could. We were all pitching in,” he explains.

This included Carolina Power and Light, which in the mid-1990’s agreed to utilize a reengineered side channel for their plant operations and signed off on the dam removal project. With their buy-in, the dam removal itself could commence. “Carolina Power and Light’s major responsibility was to produce energy and create revenue for shareholders, but the company also had a strong environmental ethic,” says Wicker. “The good press from the dam removal tickled them pink, and we liked it because it helped us accomplish our fish passage goals.”

The Quaker Neck and Cherry Hospital dam removals came at a time when many other states were starting to look at similar projects, and therefore attracted national and even international attention. The Los Angeles Times, Washington Post, and national news reports for all three major US networks picked up the story. “There was even an article in a newspaper in Japan,” remembers Wicker.

At the time, Coastal America stated that the project was a “precedent-setting event which vividly illustrates that dams can be removed for the benefit of the environment without sacrificing economic growth and quality of life.” On December 17, 1997, the groundbreaking ceremony for the demolition of Quaker Neck Dam was attended by then-Secretary of the Interior Bruce Babbit, CEO of Carolina Power and Light Bill Cavanaugh, and NCDENR Secretary Wayne McDevitt among others.

Looking back twenty years later, there’s no doubt that the removal of Quaker Neck was a success. “There’s no question that it has benefited diadromous fish populations simply by removing a major barrier,” says Wilson Laney, USFWS  Senior Biologist for Fisheries and Ecological Services, and member of APNEP’s Science & Technical Advisory Committee Executive Board as well as APNEP’s Policy Board. “Now we have American Shad spawning [upstream] in the Little River, which they weren’t able to reach before.”