Marjorie Rayburn is a retired NC Cooperative Extension Agent for Water Quality and Commercial Horticulture.  She led educational programs dealing with water quality, horticulture, pest management, and sustainable agriculture for farmers in northeastern North Carolina. Serving on many APNEP committees, Marjorie helped shape APNEP activities both in the Chowan River Basin as well as across the Albemarle-Pamlico region. Currently, Marjorie volunteers as a Cooperative Extension Master Gardener, and enjoys kayaking and being on the water.

I’ve been involved with APNEP in a variety of capacities. I was member and chair of the Chowan River Basin Council from 1997 to 2002, serving as vice-chair and then chair from 2000 to 2002. After the Policy Board replaced the River Basin Councils, I served on APNEP’s Policy Board from 2002 to 2012. I also served on the Albemarle Citizen Advisory Committee from 2006 to 2012, and on the Ecosystem Based Management Transition Team. 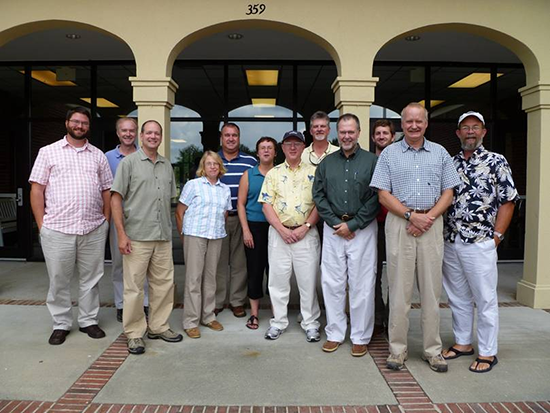 I think probably serving on the Ecosystem-Based Management Team was the greatest challenge I faced. It was interesting to work together with a lot of diverse individuals, to come up with something we can all put our names on and agree to. We were looking at it from different perspectives because of our different positions, and I was kind of pushing for the education aspects, because as an extension educator that’s very close to my heart. I think we all worked together really well, but came at it from slightly different perspectives. It wasn’t that it was that difficult, but it was a long process.

We had a lot of meetings and joked about tearing up the roads between wherever we came from and Halifax County, where we were meeting, and we got to know the local restaurants pretty well.

Tell us how your work, organization, or research has contributed to our collective mission of identifying, protecting, and restoring the significant resources of the Albemarle-Pamlico system.

My role as an Extension educator helped inform people about water quality issues and the Albemarle-Pamlico National Estuary Partnership. As part of my Extension Program, we developed a “Water Quality Stewards” program, teaching participants about different aspects of water quality in the APNEP region and sharing that information with others, raising awareness of the Albemarle-Pamlico region.

The Stewards program was a series of about 14 different meetings where a group of really interested farmers had the opportunity to discuss water quality issues and see those issues firsthand during field trips throughout the Albemarle-Pamlico region. We also had some people who participated in APNEP’s monitoring program, and we had several people who would go out and give talks to Ruritan groups, Rotary Clubs, and Garden Clubs, to tell them a bit about the estuary.

What does it mean to you to be an APNEP partner?  Describe how your involvement has enhanced or benefitted your work, organization or research.

I valued the relationships I developed with APNEP staff throughout the years I served on APNEP committees and councils, as well as those I developed with other partners.  Networking was also an important aspect of being an APNEP partner.

Share your elevator pitch! If you had 1 minute to convince someone about the importance of investing in (or providing other types of support for) research, monitoring, education, conservation, restoration, etc. of the A-P system, what would you say?

Even if you don’t go near the water, you benefit from having a healthy, viable ecosystem which supports life in the region - plants, animals, and humans.  We all have a responsibility to help in the effort to protect that ecosystem so it will be there for our grandchildren and future generations.  A healthy estuary produces food, provides recreation, and may even help mitigate the effects of sea level rise and global climate change.

Tell us an interesting fact or story about the A-P watershed and estuarine system that may not be common knowledge.

There is evidence that sea level rise is occurring in the APNEP region.  My husband used to monitor mosquito populations north of the Albemarle Sound, along many of the rivers and creeks that feed into the sound.  Instead of mosquito species that thrive in changing water pools (alternating between dry and wet), he was seeing a change to species that thrive in continuously wet (flooded) areas.  Areas in the swamps where the water would rise during wind tides or heavy rain and dry out at other times were now permanently wet, indicating sea level rise was the culprit.

It was a rewarding experience, and I enjoyed my relationships with the other staff and partners who were involved.