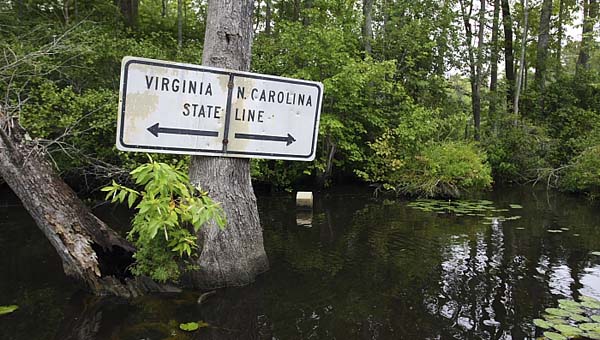 Jeff Turner is the Riverkeeper, Executive Director and Founder of the Blackwater Nottoway Riverkeeper Program. Founded in 2000, it is the first Riverkeeper organization in Virginia.  As Riverkeeper, Jeff patrols and protects the Blackwater and Nottoway watersheds in Virginia that flow into the Chowan and ultimately to Albemarle Sound.  He has helped with mussel, striped bass, herring, and shad research, as well as serving on the Virginia mercury advisory board. 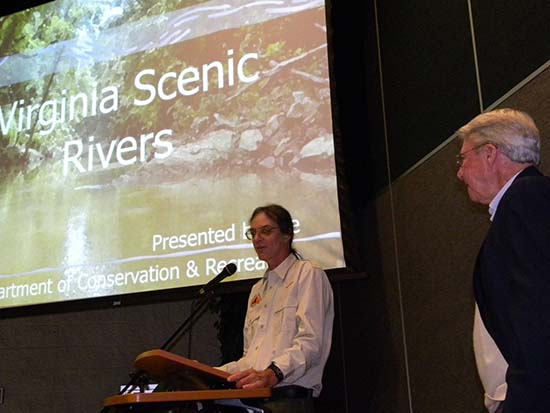 How have you have been involved with APNEP, present or past?
I participated as a member of the APNEP Citizen Advisory Committee and helped judge grant applications.  During this time, the CAC approved funding of schoolyard stormwater demonstration projects, including a nature classroom and exploratory trail at Edward W. Wyatt Middle School in Emporia, VA.
Tell us how your work, organization, or research has contributed to our collective mission of identifying, protecting, and restoring the significant resources of the Albemarle-Pamlico system?
I work to keep ya’ll clean downriver. 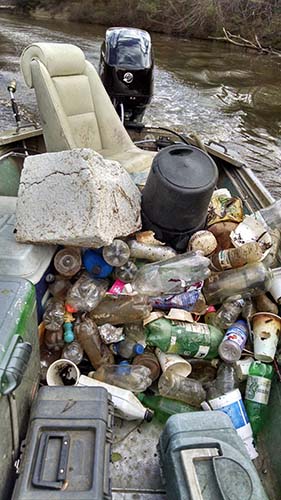 What does it mean to you to be an APNEP partner?  Describe how your involvement has enhanced or benefitted your work, organization, or research.
I have received data on herring studies from Sara Winslow, retired District Manager with the N.C. Division of Marine Fisheries, in the past that helped me.
Share your elevator pitch! If you had 1 minute to convince someone about the importance of investing in (or providing other types of support for) research, monitoring, education, conservation, restoration, etc. of the A-P system, what would you say?
Pay a little now to keep it clean, or pay a lot later to try to save it.
Tell us an interesting fact or story about the A-P watershed and estuarine system that may not be common knowledge.

We once had sturgeon in the Nottoway river, and it is believed that a couple of the Lost Colony survivors came to live with the Nottoway Indian Tribe. Sturgeon were once in our rivers as evidenced by finding their scales in fire pits of the local Native American sites along the river.

Is there anything else you would like to share?
Community participation is the key to helping the BNRP to protect the Blackwater and Nottoway Rivers. 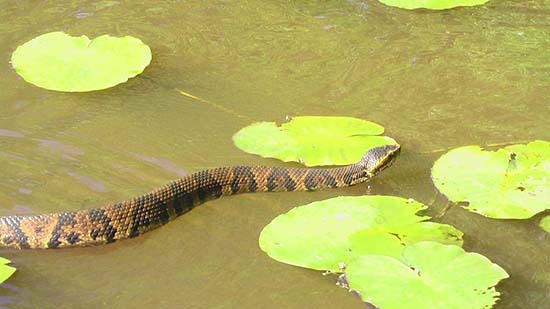 Spirit of Moonpie and I spent the 14th through the 16th on the Blackwater below Franklin. Air temps ranged from 57 to 80 degrees and the water was 70 degrees. The river was terrible muddy. I even checked with a friend who said as far upriver as Broadwater Bridge it was muddy. I don’t understand where all that is coming from unless it is from logging operations in the swamp up at Dendron. Anyway, I would say it did not hurt the fishing too much. Before I learned upriver was also muddy, on the first day I headed upriver trying to escape the chocolate milk colored water. I went so far I was nearly to Joyner’s Bridge. It was tough going, lot of logs to hit and go over, but it was worth it. I caught 14 bass up there; all on Mepp’s and jointed Rapala’s. None of the fish were over 14 inches but it was a lot of fun. I caught 6 more the next day downriver from Franklin, all about the same size. I did hang a 3 or 4 pounder, but my bad hand/left arm was not fast enough and the acrobatic largemouth went airborne on me and threw the lure. OH WELL! I caught a bunch of really nice bream and red throats also on this trip. 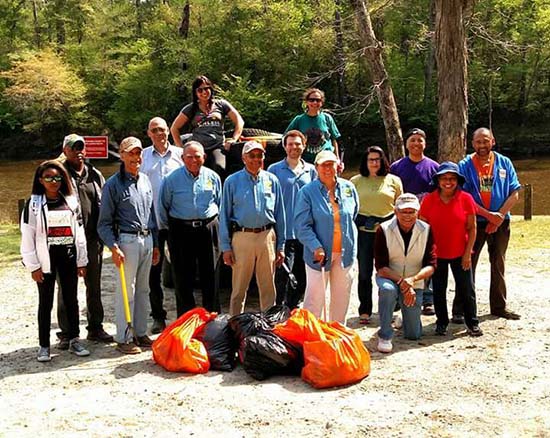 Trash once again was nearly non-existent. Speaking of trash, I want to thank International Paper for putting four teams out in our community and along our rivers to do a big clean-up. They collected an estimated 2850 pounds of tires, trash and other junk from our environment. And ALSO, the Nottoway Indian Tribe of Virginia did a clean up at Cary’s Bridge removing an estimated 760 pounds of junk and tires from that boat ramp facility. Great job to both of these groups.
Clean Rivers Day goes on everyday, year around, if you have a team or group that wants to clean-up our swamps, streams or rivers, let me know and I will get you litter getters and heavy duty VDOT trash bags. 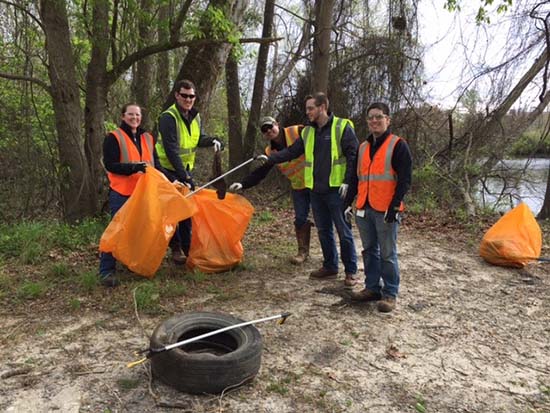 There was a nasty scum on the river this trip but it was biological and I believe made up of mostly bug carcasses. There were gamillions of some kinda fly out there. Each morning the boat, tent, everything would be covered with whatever insect these things were. Thank goodness they did not bite! On the Moonpie Critter Patrol: We saw a baby eagle at the Pretlow Farm nest. This year’s crop is getting pretty big, like two foot tall big. In another month they will be flying. Ahh yes, and the snakes. I saw more amazing snakes on this trip once again. We saw a beautifully colored Northern Watersnake. We saw a fat cottonmouth swimming across the river, typical cottonmouth, no hurry, take my picture, get out of my way type attitude. Another was a brown watersnake like 10 foot off the water in a tree. Not often I see them that high up. The record for me though still goes to the orange belly I saw once that was 20 foot up in a tree. I also watched a blacksnake crawling around on a large cypress tree. That snake was checking out every crack and crevice in that tree. So intent was the snake at his task, that it never noticed me two foot away until I touched it to get its attention. Then it crawled back up the tree and went from the cypress tree to other trees and into the canopy with amazing speed. We also filmed a beaver that was not happy with us being in its neighborhood. It actually tried to herd us out of the area. We also heard the Great Blue Herons at their rookery near the Rt. 189 Bridge. Go to my Facebook page and listen to this amazing sound track. They were really creating a racket back in the swamp. One other critter on the Moonpie critter patrol we came across was a turtle. It was flailing crazily in the water and I thought at first it was turtles mating. But after checking it out and watching it, we determined that was not the case. In fact the turtle seemed injured, so I netted the large Northern Red-Bellied Cooter. I looked the critter over for hooks or fishing line, sign of an outboard strike, bullet holes but could find nothing wrong with it, other than the fact it acted like it could no longer swim. Moonpie wanted to keep it and take it to camp with us, but I told her that would not be the right thing to do cause wildlife needs to be free. So we took the Cooter over to a sandy beach and let it go there. It sat there for a moment then started crawling up the bar towards the woods. Maybe it was a she turtle and just needed a nice place to lay her eggs? Anyway, it crawled fine so we decided to take our leave and as we were watching our colorful new friend make a bee line for the tree line it, turned around and waved at us as we were backing off of the beach. So I guess that was a sign that all was good in Cooterville. 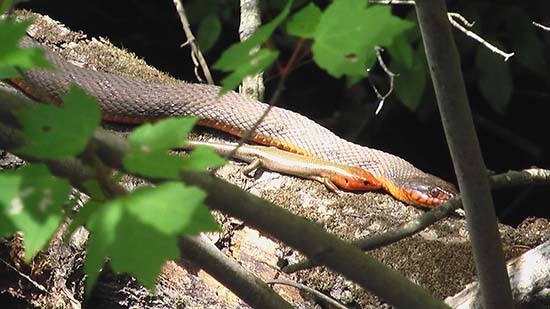 Well it looks like summer is bout here, so sadly for me this most likely was my last land-based trip this spring. When it gets hot I start staying on the pontoon boat. This trip was pushing it to stay in the woods, but at least I got to have two more nice camp fires (thank you for the excellent firewood Dan Fowler) before having to give up my land base camps till the Fall. So bugs and heat will be my beat for the next few months on the two Rivers we call the Blackwater and Nottoway. 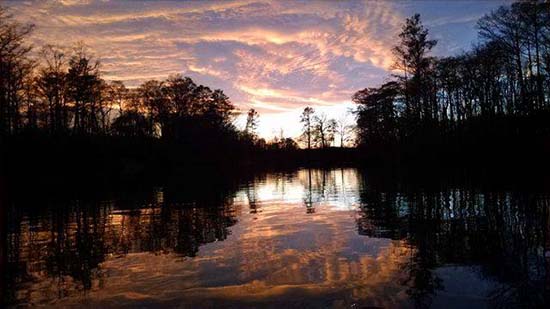 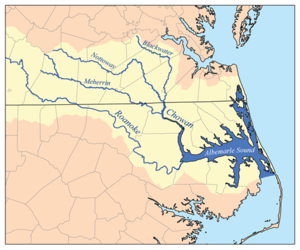