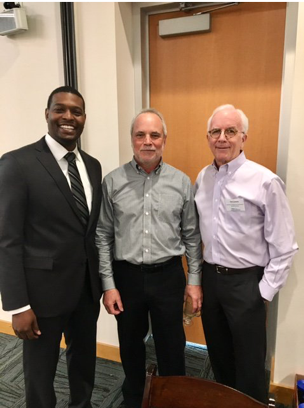 Michael Regan, Secretary of the N.C. Department of Environmental Quality, welcomed the crowd and confirmed Governor Roy Cooper's and the state’s endorsement of efforts to restore oysters and bolster North Carolina’s shellfish aquaculture industry.  He emphasized the need for partnerships between elected officials, conservation and business communities, and all levels of government to build the shellfish industry.

Secretary Regan recognized the RTI study comissioned by APNEP, which demonstrated that coastal habitat enhancement programs managed by the Division of Marine Fisheries provide $4 in benefits for every $1 invested in the coastal region. “Natural resource protection and economic prosperity are not mutually exclusive,” Regan said.

Sen. Bill Cook (R-Beaufort) encouraged North Carolina’s ability to eventually outpace Virginia in the oyster industry. Chris Chung, CEO of the Economic Development Partnership of North Carolina, spoke about the importance of developing regional economic strategies focused on the resources and assets of the region.

The federation introduced the Strategic Plan for Creating a Robust Coastal Economy with Coastal Restoration, which will help guide economic growth on the North Carolina coast for the next five years. This plan was created by a diverse team of stakeholders including APNEP. 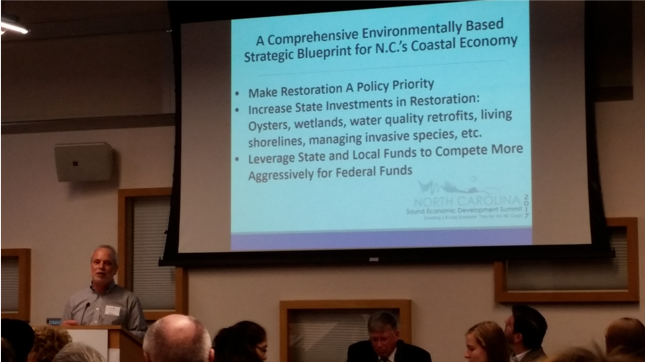 Panelists on the first day focused on the benefits of expanding North Carolina’s shellfish aquaculture industry and potential to do so with its 12,000 miles of estuarine shoreline. Attendees learned about what the state is already doing and what gaps still exist. Summit panelists generally agreed that a group should be convened to create a comprehensive state shellfish aquaculture plan, address issues with leasing in public trust waters issues, and develop industry-specific training.

Neighbors from Virginia spoke about their success in shellfish aquaculture, but also the current challenges the industry faces. A strong research foundation through the universities and state government support helped establish their industry after the wild fishery dropped in the 1990s.  Marketing efforts and the development of an infertile triploid oyster that could be sold in the summer also helped the industry take off.

One way to expand the shellfish aquaculture industry in North Carolina, said Todd Miller, executive director of the federation, is to bring in more federal funding.

“The federal farm bill is the largest source of conservation dollars in the U.S., and we’re woefully behind in competing for those funds,” he said. “We’ve never put our heads together and figured out how to compete more effectively.” Miller showed that North Carolina is ranked 49 out of the 50 states in landing these conservation dollars, even though the state has the eighth largest farm economy in the nation. Miller said it is vital to bring these issues to the attention of elected officials and gain support to better compete for federal funding.

Kris Noble, assistant county manager of Hyde County, said that the county is dependent on clean water for agriculture, commercial fishing and tourism, and has been competitive for federal money in part due to the help of the federation.

Day two of the summit largely focused on the connection between smart stormwater management and coastal water quality restoration. 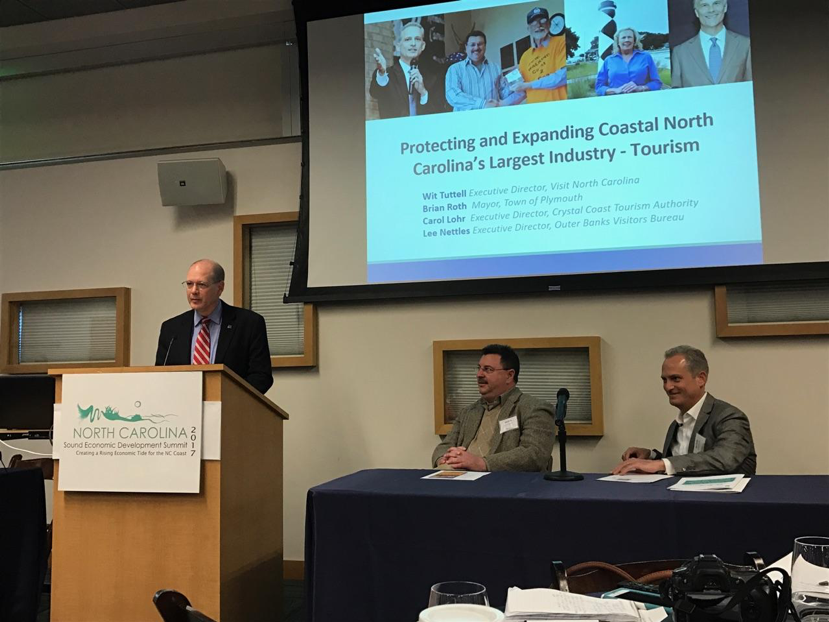 Dr. Bill Crowell, director of APNEP, led a panel about the link between water quality and coastal tourism. He said our estuaries, particularly the Albemarle and Pamlico sounds, are ideal assets for boosting the North Carolina economy.

"The Albemarle-Pamlico estuary is an estuary of national significance. It was designated in 1987 because it was not fully degraded and there was still hope, unlike many other estuaries around the nation,” Crowell said. “People still come here because of these resources."

An economic valuation study conducted by RTI International for the APNEP region estimates benefits of more than $3.7 billion from tourism and recreational activities such as fishing, hunting, wildlife viewing and visits to national seashores and state parks.

Jane Harrison of North Carolina Sea Grant emphasized how people's access to natural resources encourages efforts to preserve them. This helps spur the development of infrastructure that can support tourism, which will benefit rural counties’ economies. She outlined these concepts as part of a new “blue economy: a sustainable ocean and coastal economy, which emerges when economic activity is in balance with long-term ocean capacity.”

Remediation, restoration and revitalization are all part of the process to economic development using natural assets. Mary Penny Kelley, Senior Advisor for Policy & Innovation with the N.C. Department of Environmental Quality, spoke about the importance of identifying coastal resources and restoration projects as a type of infrastructure, which are more likely to receive funding and support.

A resounding conclusion from the summit was that a variety of groups must work together to enhance the state’s economy through coastal restoration.

Here are other key conclusions from the summit:

Using momentum from the summit and building upon the work outlined in the Oyster Restoration and Protection Plan for North Carolina: A Blueprint for Action 2015-2020, North Carolina should take these next steps to move forward:

To learn more about highlights and presentations from the March 22-23 summit, visit the federation’s website at nccoast.org or check out the #SEDS17 hashtag on Twitter.